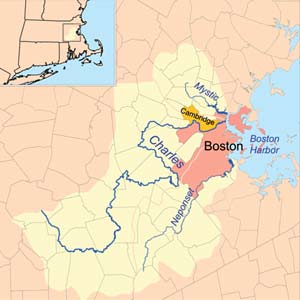 Map of the Charles River

Each year the Cambridge River Fesival is held in celebration of The Charles River.  Winding Down the Charles was an interactive public art installation located along the banks of the River. Over the course of two consecutive festivals the artists and Cambridge residents wound up 251 spools of string, equaling the 78.4 miles of the Charles from its origin to its outlet into Boston Harbor.

The spools of string were set along the river-bank and threaded through five 10’ steel Needle Towers.  The artists and Cambridge residents attending the River Festival continuously wound the string, day and night, into a growing ball.

Memories of the River

While the artists wound the ball, people  attending the River Festival were invited to write their thoughts and memories of the Charles River into a journal and on blue ribbons.  They then tied these ribbons to the string being wound up into the ball. Residents could reflect on the importance of the river in their lives.

To wind up the 78.4 miles of string took two consecutive River Festivals. Each year, the ball was wound day and night for over forty hours, adding up to total of 87 hours of winding. In the first year 38 miles of string were wound. The following year in 1998 the entire river was wound up, creating a 37”, 550lbs ball, which is now mounted in a cart for display.