A town clock, bell tower, shade canopy, occasional bandstand as well as a symbol of sustainable design for the Eastbridge Town Center

WaterWorks is a well used public space, an art environment and a functioning hydro-power plant. The site is focused on the water room and includes a power platform/dance floor; an outdoor classroom; pedestrian bridge; shade structures; seating; riparian terraces; and sustainable plantings, all designed by the artist led team.

The site brings into focus the role of water in the history of Phoenix and in the future of green-energy,  exploring water as both a utilitarian commodity and as a beautiful transformative substance. Surrounded by desert, the site is a lush environment full of water sensations.

The project won the top environmental design award for the Phoenix area. 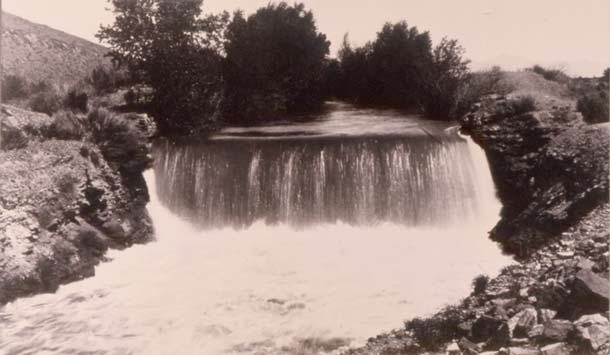 The Arizona Falls are formed by a 20’ drop along the Arizona Canal. Managed by the Salt River Project (SRP), the Canals of Phoenix are a public utility providing essential water supply and irrigation in a desert climate. Beginning in 1902 the Arizona Falls have been used to generate hydroelectric power. Once a site to be enjoyed, the Arizona Falls and the power plant became removed from the community with the site surrounded with chain link fencing.

The site prior to construction

WaterWorks was part of the renovation the old hydropower station with the SRP, who re-introduced the Hydro Power Demonstration Project as a commitment to green energy. The site has been opened up to the community.

Water is diverted from the canal into two new aqueducts framing each side of the Water Room. The aqueducts release the water back into the canal creating a pair of waterfalls.  The room is lined with water, a generator of ideas and community energy.

During excavation of the site, artifacts from the old power plant were discovered buried underground. These artifacts were left in place and incorporated into the final design, referencing the industrial history of this site. Set behind a veil of water at the rear of the Water Room, the gears and pipes transform through the falling water.

Phoenix and many of Arizona’s other major cities are located in Salt River Valley. The Salt River Project provides irrigation services throughout this area using a series of canals and five dams. The valley includes a variety of geological terrains. To represent the path of the Salt  River at the WaterWorks site, the artists gathered boulders from the site of each of the five dams. The boulders sit on the platform and are labeled with the different dams from which they came. The diversity of stone between each of the five boulders gives a sense  of the geologic variety and history.

Water In the Desert

The concrete floor of the open platform has been acid stained and imprinted with reeds to give the color and texture of flowing water. Within this symbol of the river, poetry written by Alberto Rios has been engraved. His texts explore ideas of water. The text and  floor ask visitors to look closer at the role of water in the desert.

Details throughout the WaterWorks site reference the utility of water.  While visitors take pleasure in the watery environment  they are asked to think about water’s function at the site, providing irrigation and electricity.

The artists designed with a visual vocabulary that is industrial and references water. The sustainable plantings on the riparian terraces add to the lushness of the site.

The Entrance Gate to the facility is made from a 10’ steel-lined water pipe with flanking columns, a water scupper and an electric insulator. The columns  is made from  steel culvert pipe used throughout the facility. The monumental entrance brings the themes explored inside of the facility to the outside.

Eyes on the Canal

Along Indian School Road the canal lies invisible behind its embankments. For a separate project, the artists worked with Steve Martino, Associates to reveal the trail along the canal. Four entrances to the canal bank are marked by the Eyes on the Canal to announce the unseen water.  The pieces contain thousands of glass marbles that play and reflect the sunlight like the water.