Public art proposal for an airport using real time projection of wind patterns around the globe.

A town clock, bell tower, shade canopy, occasional bandstand as well as a symbol of sustainable design for the Eastbridge Town Center

The amount of water being moved in and out of the Lagoon by the enormous Bristol Channel tides is mind-boggling and the hundred thousand homes’ worth of energy generated for Swansea is very significant. Yet it seems like the machinery that accomplishes this work will remain mostly invisible. Our artists’ response to this experience was to create a series of installations that are visibly operated by the tide, to pay homage to the huge, if invisible, contemporary machine this Lagoon will become.

Including the Tidal Water Lift, we invented a suite of seven installations in a sequence along the open water section of the dam, as meditations on levels that are constantly changing and responding to the tides. The pieces are each a little more than a kilometer apart. This will create markers along the long walk or nike ride, as people can measure their progress with each distinct marker. Each of the seven will go through different states corresponding to the phases of the tide, so on different visits people will experience a different phase of the piece. The sequence of the seven pieces will tell an experiential story, which will in the end return the narrative to the central Lagoon itself.

Here are all seven concepts we initially proposed: 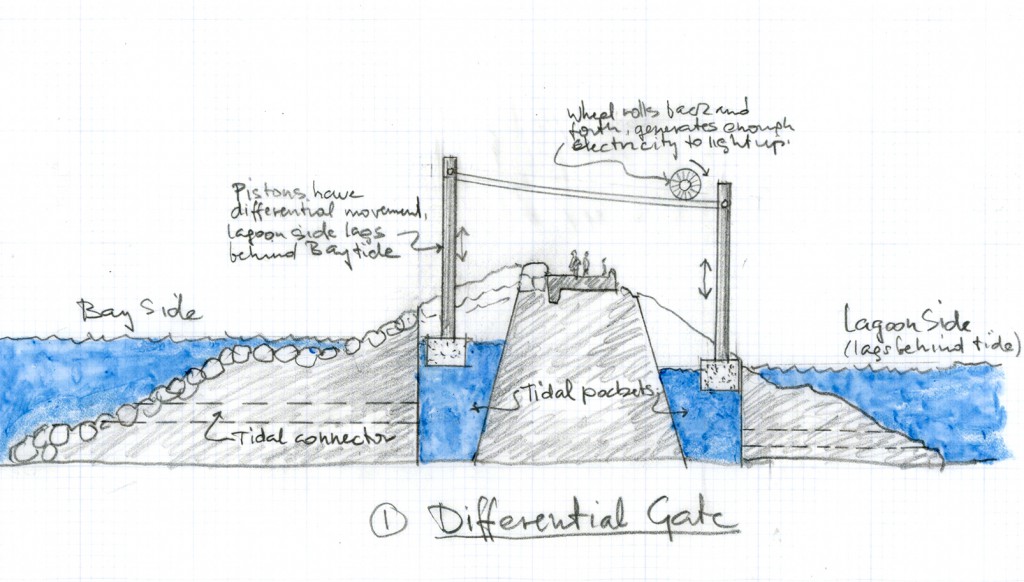 Differential Gate is the western entrance of the sequence. The level of the top of the Gate will constantly shift as the tidal rise and fall on the Lagoon side will lag behind the tide levels in the Bay, illustrating the complex balance between the two. A pole on either side of the walkway, supported on floats in tidal wells, will support a slightly curved track on which a wheel will move back and forth. The wheel will include a small generator which will generate enough electricity as it gains speed to light up he light at the center of the wheel, creating a shifting light at night.

The Highest Tide is a measure and a warning. The large ball rides on a shaft, getting pushed up by the highest tide to that water level and a breaking mechanism and fix it there. It will not move again until a tide exceeds the previous high. The remaining length of the shaft above the ball ominously anticipates future rises in water level due to climate change.

Room at the Water’s Edge is a small structure mounted on a float and guided by a rail to go up and down with the tide. A stair running along side makes it accessible at each position. In every position, the structure remains a room by the water. 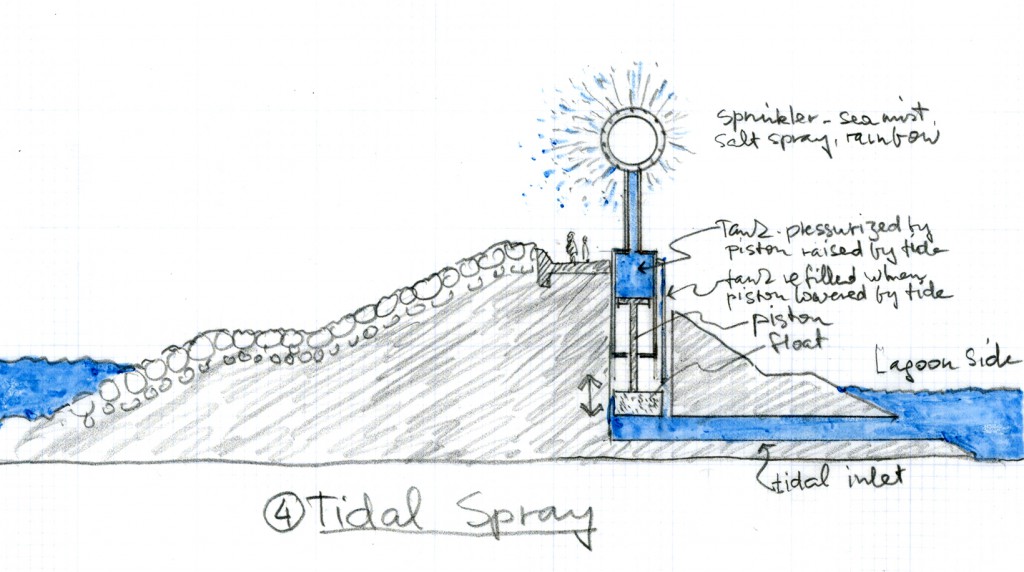 Tidal Spray The mist generated at this marker will increase the feel of salt spray creating a sensory break. Rainbows will be reflected in the mist when the sun is out. A large ring of pipe is mounted above a tank that is pressurized by a piston raised by the tide. At a certain pressure the valve is opened and the nozzles of the ring spray out a fine mist of sea water. On its way down with the tide, the piston will suck in water through a pipe that will refill the tank. 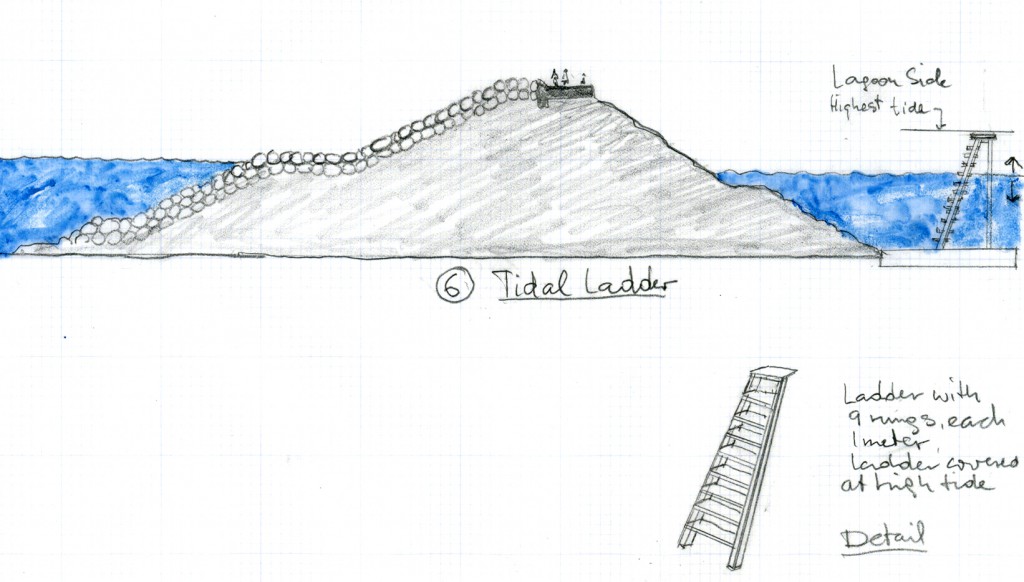 Tidal Ladder The oversized ladder will be mounted on the sea bottom on the Lagoon side, near the dam. Submerged and emerging, it will hint at underwater mysteries revealed by the tide. At moon tide the Ladder will be completely under water, but soon as the tide starts ebbing, it will be gradually exposed, until its full 10 meter length is visible at low tide. The rungs are about one meter high. Even at its giant scale, the Ladder still gets covered by the great tides.

A Public Art Proposal by Mags Harries and Lajos Héder