The Zanjero’s Line stretches along 4 miles of the Highline Canal, a waterway in South Phoenix at the base of South Mountain. Once a dusty utility area, the 8 art sites have transformed the banks of the Canal into a recreational trail featuring pedestrian bridges, seats, place markers and landscaping.  In a neighborhood surrounded by busy roads, the trail is an important facility to the South Mountain community as a place for cycling, walking, and horseback riding.

Previously, crossings had been few and far between; now four new pedestrian bridges provide many areas for people to cross the Canal. The introduction of desert shade trees (palo verde, ironwood, dessert willow) and artist designed seating create comfortable places to relax. The trail culminates in the new Circle K Park with the towering Bucket Column sculpture, seating, landscaping, retention pools for collecting rainwater, and sluices to guide excess water into the Canal.
The design vocabulary of cast iron buckets, planks, and boulders references the Canal, water-use and the environment of South Mountain.  The seats seem like improvised assemblages as though thrown together from whatever was at hand: buckets, stones, and wooden planks.  The stones are all local to reflect the South Mountain geology. The cast iron buckets suggest the utility of water running through the Canal, while the planks reference the 2” x 6” wooden planks used to regulate the flow of the Canal. These planks, however, have been made from steel channels and filled with colored concrete ground to a polished surface.  Recycled concrete pavement has been used throughout the project as the Entrance Arch, retaining walls, seating and as paving. Split boulders flank the south entrances of the pedestrian bridges, representing the mountains on the south bank.  On the irrigated north bank of the Canal, the handrails of the bridges terminate into faucets. The designs accentuate the historical impact that the Canal has had on the north and south banks. The many different elements of The Zanjero’s Line– from the Entrance Arch framing the Canal to the Bucket Column (a take on Brancusi’s Endless Column) at the end of the trail — direct attention to the Highline Canal, a line dividing the irrigated north and the mountainous south.

The Zanjero – Spanish for water master – controlled the flow of water from the canals into the surrounding farmers’ fields. Once home to flower and citrus farms, South Phoenix is evolving into residential neighborhoods. The project encourages residents to use the trail and to explore the important role of the Highline Canal.  The Zanjero’s Line, along with  Arbors & Ghost Trees (2004) and Passage (2011) were planned and designed by the artist team to give a unifying character to the newly developing South Mountain community and to remember its agricultural past. 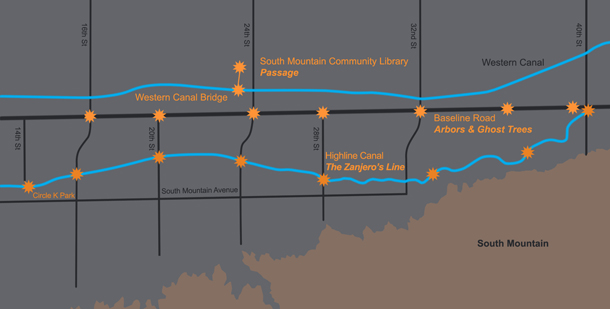