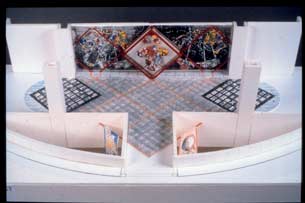 Terullian Mantle was inspired by the annual International Day festivities held in this Queens neighborhood to celebrate PS89’s ethnic diversity.  Of 1,300 K-5 students, only 110 speak English as a first language.  The central element of this multi-part installation is The Terullian Mantle, a garment made out of flags of the world sewn together in a traditional American quilt pattern to create a unified image.  Each year the Mantle is ceremonially worn by the school’s principal for the International Day Parade.

For the rest of the year the Mantle is displayed in a case at the school’s main entrance.  The case and the surrounding installation elements have transformed the space to create an environment based on images of the Earth and internationalism.  The standard Fritz  floor-tile that is used throughout the school has been cut into flag patterns. 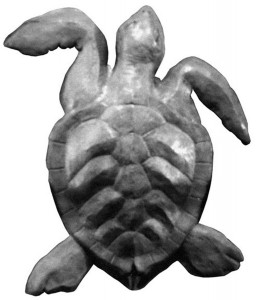 Detail of the turtle

The Mantle is in the center of the case with the cloth that it was cut from on either side.  The black of the floor is continued into the columns and into the ceiling around the case.  The red of the case is extended into the geometry of the floor.  Lighting ties the piece together into a dramatic entry space.

The background of the case consists of topographical reliefs of the Earth’s surface: on the left is a map of the Earth in 1995; on the right a map of the Earth as Pangaea 250 million years ago; and in the center is the image of  turtle, which is covered by the mantle for most of the year.

Featured in many  different stories about the creation of world, the turtle conceptually links together the distant past of Pangea and the modern world.  For this project, turtle myths and stories were collected from different cultures and are now part of the school’s curriculum.