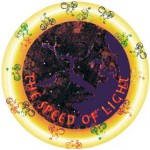 Logo for the Speed of Light Tour

Many of the Boston’s surrounding towns and neighborhoods are cut off from each other without direct transportation.  In September 1993 students of the School of the Museum of Fine Arts accompanied a group of architects, urban designers, and residents on an informal tour of the proposed ring around Boston — The Urban Ring.  From this meeting evolved the Speed of Light Tour, a multimedia evening bicycle ride through eight communities on Boston’s periphery, a public art event. It  highlights the need for lateral mass transit between the participating communities.

The Speed of Light Tour began in East Boston at sundown and finished in South Boston. A spotlight was beamed into the sky at the arrival of cyclists at each destination along the route, locating each community in the Boston skyline.

Cyclists carried with them suitcases representing each of the eight communities. The suitcases contained artifacts, pictures, and stories from each community.  At each spotlight, new cyclists and a suitcase would join the tour.

Today the Urban Ring project is still in the planning phase, conducting extensive research. The Massachusetts Bay Transit Authority has planned a series of improvements to the existing transit lines to create shorter transit trips and few transfers. The plan also calls for connections with pedestrian and bicycle paths.