Bangor, ME and the Kenduskeag Stream

Kenduskeag Roots was commissioned by the National Parks Service’s Rivers and Trails program. The Bangor public art temporary installation consists of four separate sites along the Kenduskeag Stream in Bangor, ME.  The goal of the project was to encourage Bangor residents to use the paths along the stream.

The confluence of the Kenduskeag Stream and the Penobscot

Throughout its history, Maine has been known for its logging industry.  Bangor, a port town at the confluence of the Kenduskeag Stream and the Penobscot Stream, was the industry’s center of export. Kenduskeag Roots draws on this history and explores the community memory of the Kenduskeag Stream. The sculptural components of the sites are made from trees felled in a recent ice storm. Each site uses a different part of the tree and  complements it with different sounds collected from the state’s historic archives. 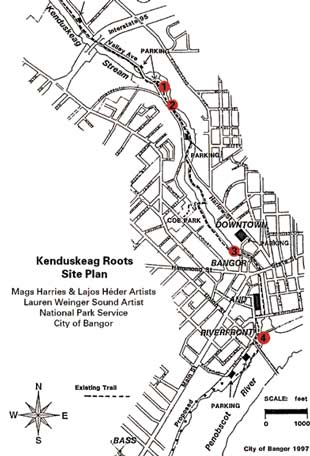 Map of sites along Kenduskeag

The Logjam juts out over the tidal zone of the Penobscot River at the edge of downtown Bangor.  Entering the site triggers an audio recording of the narrative history of the logging industry.  The recordings features stories, songs, sounds from the archives at the University of Maine, Orono.

The Roots are located at the confluence of the Kenduskeag Stream and the Penobscot River, marking where settlement began.  Recordings play archival sounds from boarding houses, bars and brothels that tell historical events of the city mixed with sounds from a ship’s radio as the lumber was exported.

The Amphitheater is made of large sliced tree trunks.  As you sit overlooking the Kenduskeag, sound moves from left to right, mimicking the water’s movement. The sounds recall a more active stream from the spring when Bangor’s annual canoe race takes place.

The Canopy is set deep in the woods just off the local trail. The site looks over a cliff and to the Kenduskeag Stream below, facing a rock called Lover’s Leap. Motion detectors activated recordings of Native American lullabies layered with sounds of insects.  The speakers were placed to lead you from the trail to the site.