As part of a city sponsored enhancement of the public environment Harries and Héder led a team of artists to create this Louisville public art installation, a 67,000 square foot terrazzo artwork on the floor of the Commonwealth Convention Center. This design draws on the natural and urban landscape of Louisville as well as the history of the city. The metal work for the terrazzo was fabricated at Harries/Héder Studio while a team of Louisville artists  assisted with the construction of the floor. The National Terrazzo Association chose City at the Falls as The Top Project of the Year for 2000.

The terrazzo floor brings local geography and imagery into the Convention Center and extends this imagery out onto the sidewalks. The design incorporates the famous fossil beds on the Ohio that interrupted navigation and  precipitated the founding of Louisville. 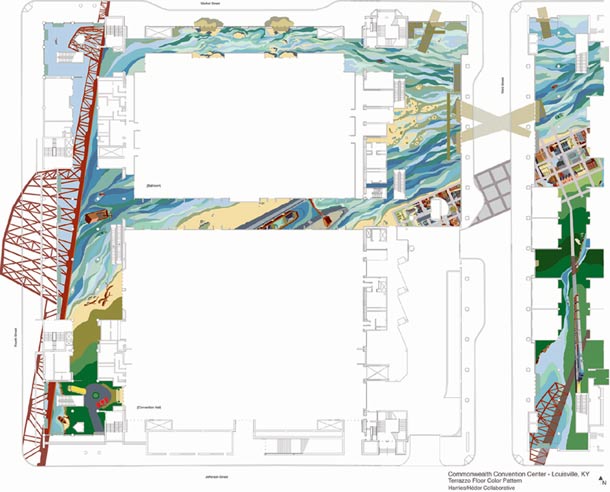 Illustration of the design of City at the Falls

The design of City at the Falls serves orient visitors and to guide them through the space.  The design creates an interior landscape  and a map using elements to visually describe the history and culture of Louisville.

Driving Under a River

A covered section of street (Third Street) runs between the two buildings of the Convention Center. In addition to extending the terrazzo floor to portions of this of street, the ceiling is  a sculptural installation made from perforated steel, reflectors, and light. Moving through the space activates the reflections and waved forms, both suggesting the flowing of the Ohio River and directing movement through the space.