Along the Bronx River

The Golden Ball is a universal, positive image that can be seen as the sun, the world, energy, life. Its ambiguity encourages people to invent stories about it and add their own mythology. This reoccurring, multimedia NYC public art event was designed to tie together the fractured experience of the Bronx River and the complex layers of people and artifacts that exist along the  River. The Golden Ball uses the River as a metaphor and physical link calling for a greater sense of community. It also directs attention to the River itself and to its struggling ecology, asking people to reclaim the Bronx River.

Route of the Golden Ball

On April 22, 1999 (Earth Day) the gilded ball first floated down the Bronx River from suburban Bronxville to inner-city South Bronx. The ball acted as a Pied Piper, with people from the Bronx to Westchester County encouraged to follow the Ball and walk the 10 mile route to learn how the River connects their homes. The voyage revealed the prime places for social gatherings along the River as well as access problems  to be addressed. The event took place on Earth Day the following year and in 2001. Residents continue to celebrate the Bronx River by recreating the voyage every Earth Day. The events have raised money to make permanent improvements along the River. 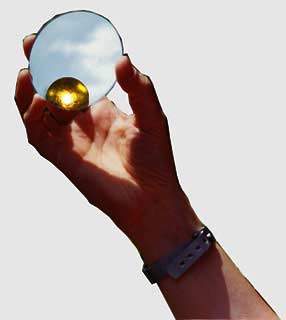 The Golden Ball’s Procession down the Bronx River included the Keepers of the Ball (the artists), who guided  the ball on its journey and the flutist Connie Grossman who provided musical accompaniment. The Arthur Aviles Typical Theater followed along the river bank with an improvised dance. The Golden Ball and its Keepers stopped along the way to join a series of community celebrations at key points and traverse the Bronx Botanical Gardens and the Bronx Zoo. People at the events were given small round mirrors to reflect sunlight at the Ball to give people a direct connection to it.

At the end of the Golden Ball’s journey the Procession came to Hunts Point in the South Bronx. To reach the River community members removed fencing that had restricted their access to the water. Twenty-seven community organizations came to lift trash from the river, create trails, paint, plant, and create a new park.  The event is now in it’s 11th year and has raised $39,000,000 to sustain the Bronx River. In recent years the River has seen many improvements including the return of beavers to the water.