Set in Boston’s busy Haymarket neighborhood, Asaroton, 1976 focuses interest downwards to create an intimate experience of discovery.  For four days of the week the site hosts a famous open-air produce market.  The embedded bronze pieces replicate the trash and debris that might normally cover the street.  When the  stalls and real debris of the farmer’s market cover the art, it becomes part of a living experience.  On the other days of the week it is a memory of the market.

Artifacts from the Past 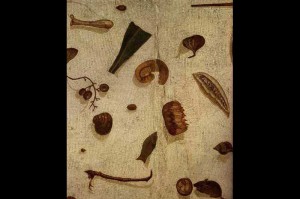 The piece derives from Roman floor mosaics, asaroton, which create the illusion of debris from a banquet littering the floor.  They are full of humor and details that give insights into the Roman world.  The mosaics have survived, a piece of fossilized history.  This Asaroton is an artifact of 1976, to be rediscovered after many footsteps have worn it down.

The piece was commissioned as a commemoration for the Boston Bicentennial.  Sited in a major crosswalk on the Boston Freedom Trail that connects Boston historical sites, the piece is a historical site itself,  the archeological remains of 1976.

During the disruptive construction of the “Big Dig” the installation was removed and relocated to the Boston Science Museum where it remained for 10 years.  In 2006 a new Asarton was reinstalled at Haymarket with components updated for the 21st century.

After the completion of construction in the area, Asaroton 1976 was replaced with new pieces in 2006. The pieces of the old installation were displayed at the Boston Science Museum for 10 years